Springboard’s CLL is designed around the concept that local, small-scale biodiesel production represents an attractive and under-served market opportunity. In the production of biodiesel, the cost of feedstock represents the largest cost to the producer, and because the most common, widely available feedstock sources are farmed crops such as soy, canola and palm oil – all more expensive in their raw form than the diesel fuel they are processed to replace – the commercial price of biodiesel has historically been higher than that of diesel fuel. More recently, the biodiesel industry has looked to less expensive feedstock sources, such as used cooking oil (“UCO”).

Springboard’s CLL makes 100% of its biodiesel from used cooking oil. The system processes multiple types of feedstock, however, and will create a cost advantage to the producer by locating the entire system at the source of the local, low cost feedstock.

Specifically, the CLL can process any vegetable and/or animal oil that is less than or equal to 10% Free Fatty Acid (“FFA”).  FFA% is the measure of an organic oil’s degradation – the higher the number, the less that can be done to process it.  The CLL’s 10% capability allows for a wider variety of feedstock sources than existing small-scale systems.  Importantly, the feedstock flexibility allows for meaningful cost advantages to the user, as it can be placed near UCO collection facilities, chicken processing plants, fish processing plants and/or large farming operations (such as rice mills in N. CA.).  The physical proximity to the locally available feedstock and the subsequent “locally produced; locally consumed” nature of the CLL-produced biodiesel ensures that the owner/operator of the CLL will be making biodiesel with the lowest possible cost base.

Springboard’s CLL installation is located at 2323 Park Avenue, Suite 125 in Chico, California and is designed to produce 1,000 gallons of ASTM-D6751, B-100 biodiesel per 9 hour day and can be scaled up to make more based on available feedstock.

The footprint is compact – set within a 60’ x 80’ dedicated production area with an additional 2,500 square feet of dedicated outdoor tank storage space and required spill containment.  Because the system is a fully closed loop system, with all separate production modules connected via industry standard pipe plumbing, and with all electrical connections appropriately grounded, it enables automated processing within the safest possible processing environment, assuring high quality fuel with a minimum of cost.

Specifications of the CLL System

In mid-2012, Springboard was awarded a matching grant from the California Energy Commission (CEC) of $758,200. The grant was awarded under the CEC’s Alternative and Renewable Fuel and Vehicle Technology Program, and has helped establish the Company’s first production CLL in Chico, CA.

Springboard Biodiesel is not aware of a comparably functional small-scale biodiesel processing system.

The CLL has been designed as a modular system that can be customized to the specific requirements (capacity) of the operator. The Company’s base configuration will be 1,000 gallons per day in a two-shift (or staggered single shift) work schedule. This can be increased or halved, depending on the operator’s economic model and feedstock access. Below is a description of each of the modules:

Coarse Storage: The basic system will produce 1,000 gallons over the course of 24 hours and necessitates a 9 hour work day – load first 500 gallons in the morning and the next 500 gallons before leaving for the evening.

Pre-processing Unit: This further processes the oil, heating it up to 200ºF and dramatically reducing the MIU.

First Oil Buffer: This is a 700 gallon tank that is continuously filled by the preprocessing unit and emptied into the four (4) 125 gallon reactor units every 8 hours.

Reactor Units: Under vacuum the oil (up to 10% FFA) is heated and then reacted into raw biodiesel and glycerin. During the reaction the reactors are interfacing with a large condensing unit that is simultaneously condensing methanol and water vapors (all recaptured methanol is re-purified and re-used in subsequent batches).

Waterless Filtration Prep Units: Similar to the company’s SpringPro™ T76, these dual column filtration units treat the raw biodiesel prior to introduction to the Demethylation Skid. The media is relatively inexpensive, focused on the removal of soaps and other non-methanol related trace contaminants, and safely land-fillable upon exhaustion.

Demethylation Skid: Comprised of three (3) separate modules, this skid removes the trace methanol from the glycerin, leaving the glycerin at approximately 90% purity and producing as a by-product salt (NaCl) and high FFA% oil that will later be used as a source of heat (in-line boiler); it will remove the methanol from the raw biodiesel – without the use of water. This skid is comprised of the BD-380, the G-190 and the MC-12.

Methanol Recovery Unit: This is a purification station that takes the recovered “dirty” methanol and return it to 99.8+% purity, enabling a lower cost of goods for the next batch of biodiesel.

System Integration Module: The entire system is fully automated, with redundant process controls and the ability to remotely monitor the systems during operation.

Back in 2014, the CLL was turned on. It produced nearly a quarter of a million gallons of ASTM-D651 grade biodiesel. The Company’s goal was to locate defined CLL “nodes” throughout California and beyond and network these nodes. Unfortunately, in 2016, the cost of diesel dropped to 12 year lows in California. The CLL was "mothballed" and ownership is now seeking a buyer interested in benefiting from this equipment.

Any business that feeds people or produces waste vegetable or animal oil and is interested in establishing a new revenue stream or significantly improving its operating margins, is encouraged to contact Springboard Biodiesel to discuss.

The CLL’s processing flexibility, environmental impact and rapid economic benefits create an excellent platform upon which to rapidly build a large network of, local biodiesel production facilities, both in the US and internationally.

Please contact Springboard Biodiesel if you are interested in setting up an appointment to view the CLL system. Serious inquiries only. 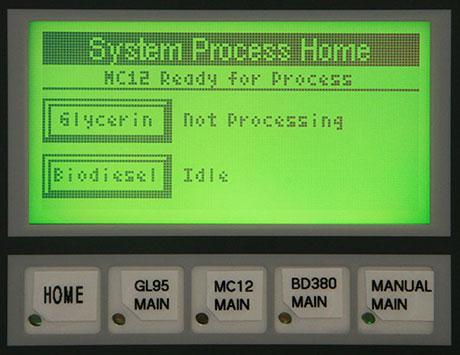 Glycerin handling: The main biodiesel by-product we commonly call glycerin, or biodiesel bottoms, is actually a mix of glycerin, methanol, soap, salts, and oils. This glycerin, in its normal liquid form, can be challenging to dispose of and messy to handle. The GL95 turns this challenge into an opportunity.

Methanol recovery: The glycerin by-product left over from the biodiesel reaction will contain methanol, approximately 23% by volume. This methanol is fully dissolved and cannot be separated by settling. The GL95 & MC12 separate the residual methanol from the glycerin by employing heat, evaporation, agitation, and vacuum. The vaporized methanol is then condensed back into liquid “wet” methanol that is approximately 97% pure. This methanol is valuable. It cannot be used immediately to make more biodiesel without first having the residual water removed. (Ask us about our Lamathen methanol purifier!)

‍Saponification: After the methanol has been removed, the GL95 uses a lye and water solution to convert the remaining oils of the glycerin into soap. The resulting blocks are easy to handle and often qualify for simple disposal as solid waste. Alternatively, saponification can be by-passed leaving a thinner liquid soap mixture which can be used as a composting accelerant.

ASTM
Compliance and methanol recovery: Biodiesel that is treated by a drywash system like the SpringPro T76 will have more methanol present in it than is required by the specifications of the ASTM-D6751 standards. Though this additional methanol rarely impacts the performance of a diesel engine, a business cannot legally sell this biodiesel without meeting this standard. By removing and recapturing your methanol from your biodiesel in the BD380, you will drop this additional methanol out of your biodiesel coming closer or achieving that goal while simultaneously recovering the wasted methanol as a separate liquid.